Society’s Third Annual Oplatek is The Most Successful Yet!
Monday, December 29 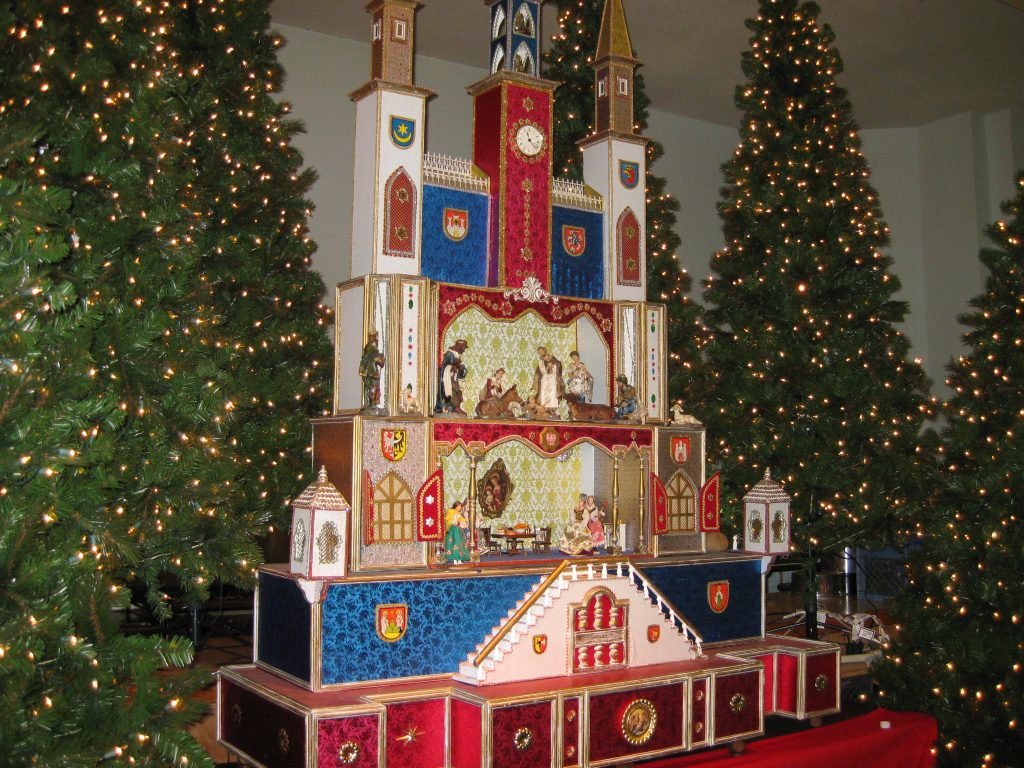 St. Hedwig never looked more beautiful, nor did the music within ever sound more glorious, than on the afternoon of Monday, December 29, when the Society held its third Annual Opłatek beginning at 2 p.m. This year was very special in that the Society began the first phase in a series of tributes to organists who have served in west side Detroit Polonia’s parishes throughout the years.

The committee members for this event were Bob Bielenda, Steve Frayer, Adam Lis, Michele Lipinski Matuszewski, Rev. Gary Michalek, Laurie A. Gomulka Palazzolo, Thaddeus C. Radziłowski, Ph.D., Leonard Skowronski, and Virginia Skrzyniarz. President Adam Lis did his usual extraordinary job decorating St. Hedwig, and Director Steve Frayer did an exceptional job and put in many hours of work coordinating and organizing the honorees. The event happened to coincide with the Piast Institute’s move to its new headquarters in Hamtramck; thus, Dr. Thaddeus Radziłowski could not be present. Also absent were board members Dr. Alina Klin, who was in Poland, and Director Richard Sokolowski. Director Virginia Skrzyniarz donated a beautiful piece of Polish pottery from the Polish Art Center in Hamtramck, and Steve Frayer donated a gorgeous crystal decanter, both of which were given away in a drawing as door prizes. The winner of the Polish pottery was Mr. Jerry Sielagoski, and Ms. Lottie Surmacz won the crystal piece. Congratulations to both winners, and thanks to Ms. Skrzyniarz and Mr. Frayer for their generous contributions! 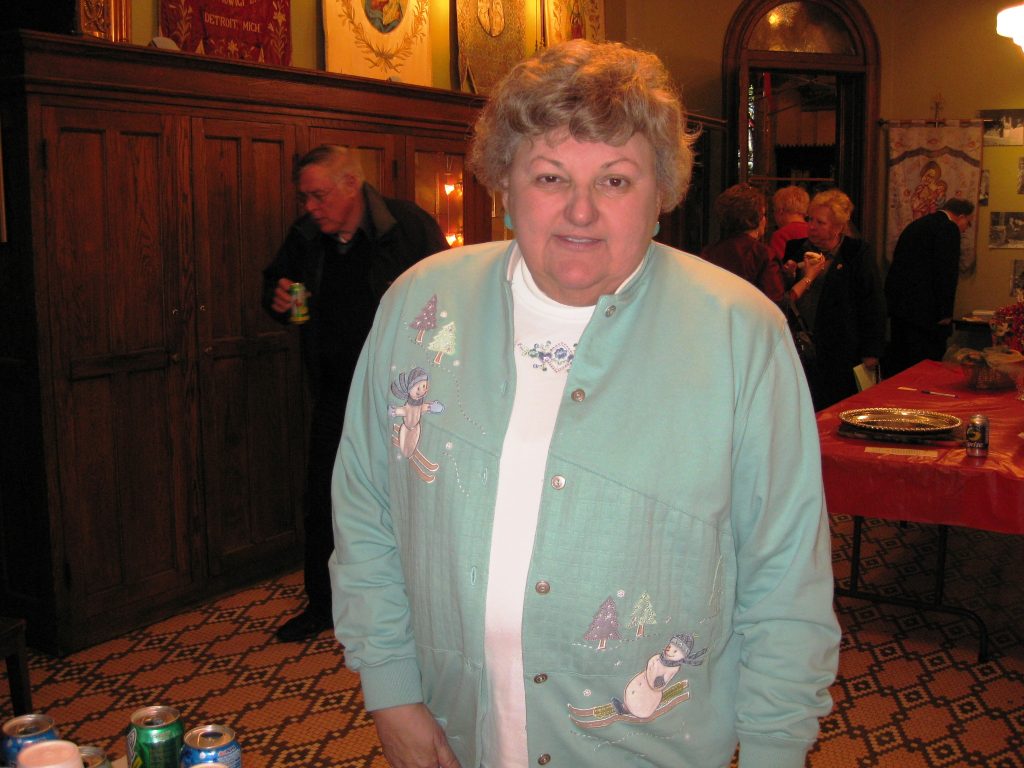 President Adam Lis, Master of Ceremonies, welcomed approximately 80-90 guests and honorees who had gathered in the church and then introduced the Society’s board members. Rev. Gary Michalik gave a brief presentation on the Opłatek tradition as board members distributed the opłatki to all present to share with one another as all exchanged greetings of goodwill for the New Year.

Director Steve Frayer then gave a very moving presentation entitled “From Your Hands,” thanking the honorees for gracing our churches with their talents throughout the years and telling them how proud we are of the legacy that they have given us to treasure. He reminded those present that by embracing the keys of the organ, the honorees, many of whom began their vocations as teenagers, have done the work of God. They knew the people of their parishes, laughed with them, cried with them, and sang to the Lord who was their hope. He reminded all of us that the organists nurtured a people – playing the hymns of a people separated from their homeland, many of them children or teenagers themselves. The organists’ music connected a people once again with the rich traditions that they left behind when they immigrated to a strange land. There were tears as he reminded us that nothing can compare to a Polish parish or to the music within a Polish parish.

Many of the organists also served at other parishes as well throughout their years of service; thus, it was difficult to categorize them. However, we did our best to do so, and since St. Stephen had the largest representation we wanted to be sure to group all of the St. Stephen honorees together.

The next category of honorees was for St. Andrew, St. Hedwig, St. Francis d’Assisi, Ss. Peter & Paul, Our Lady Queen of Angels, and Our Savior Polish National Catholic Church (Detroit and Hamtramck). Once again, many of these honorees served at other parishes as well throughout the decades. The honorees included Mrs. Virginia Dombrowski, Ms. Deborah Frontczak, Mrs. Stephanie Marsh (who this year will celebrate 50 years as organist at Holy Cross P.N.C.C. – Hamtramck), Mr. Walter Matysiak, Mr. Curtis Posuniak, and Mr. Dan Urbiel.

Rev. Gary Michalik thanked everyone for attending and wished all a Happy New Year, and invited all present to join the board members in the Heritage Room for refreshments, which included hors d’oeuvres, pączki, Christmas cookies, coffee, and soft drinks. The room was aglow with the lights of the Christmas tree, candles, and the warmth of everyone who made the day the success that it was.

The board of directors and the Annual Opłatek committee members are grateful to all who contributed to the enjoyment of this event. Once again, we extend our heartfelt appreciation to our guests of honor, Rev. Edward F. Zaorski and Rev. Mario Haby, and to all our honorees. We also extend our sincere appreciation to Rev. Robert J. Wojciechowski for allowing us to hold our event at the lovely, historic St. Hedwig, and for all Rev. Wojciechowski does to extend his hospitality to the Society on an ongoing basis.

We also thank members Frank and Rosario Solano, who were in warm Peru, for the generous donation of Mexican breads from LaGloria Bakery. 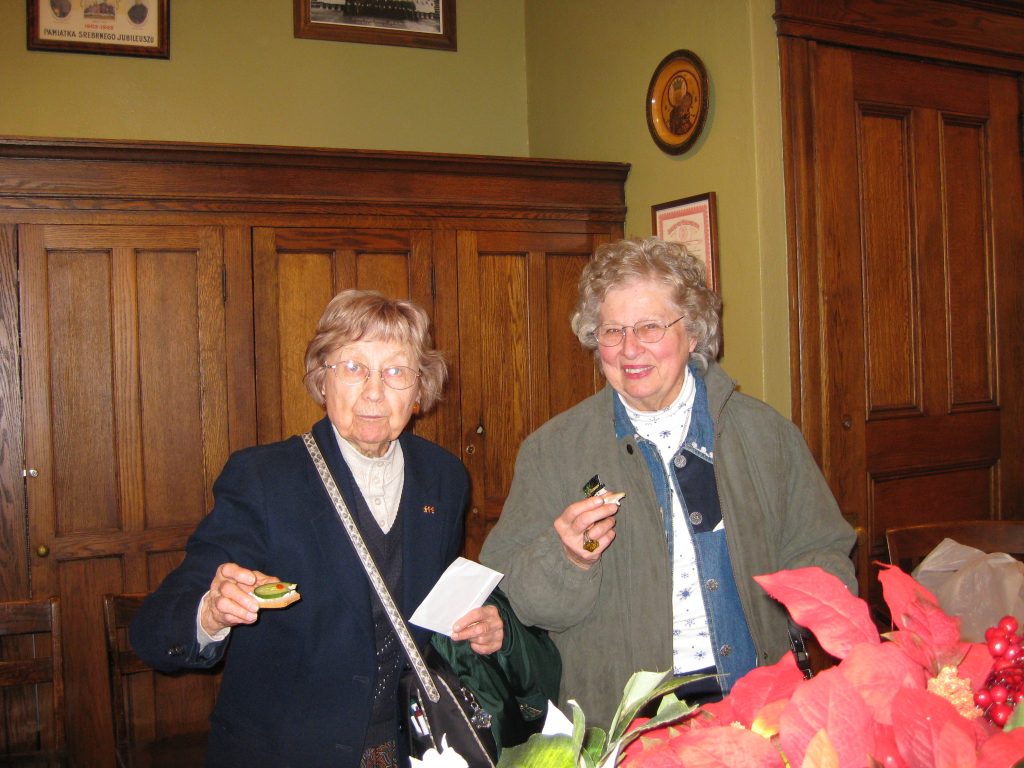 Because this is the first of what we anticipate will be a series of events honoring west side Detroit Polonia’s organists, we welcome our members’ input in helping us locate other organists who have not yet been recognized, and we thank you for your assistance with and suggestions for future programs. Please feel free to send your comments to lpalazzolo@www.detroitpolonia.org.

In addition, in the New Year the Society’s board will discuss seeking grants for the much-needed repair of the organs at St. Hedwig and St. Stephen Churches. We welcome the assistance of anyone with expertise in this area. Dziękuję bardzo!