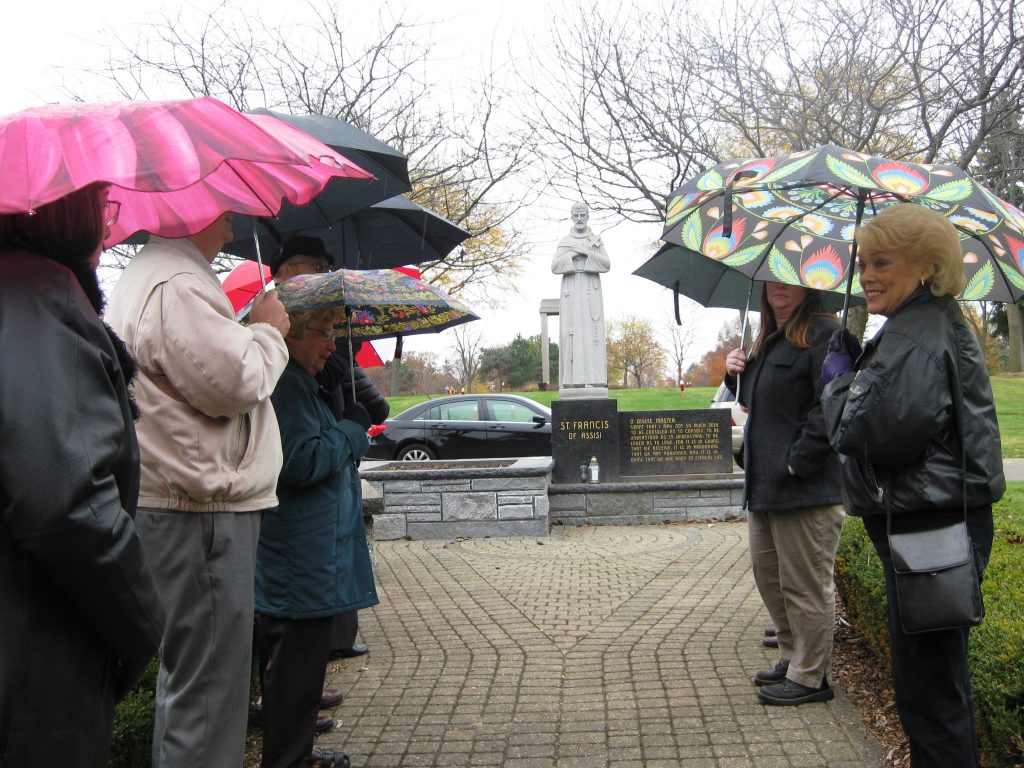 We gathered once again on sacred ground to meet in somber remembrance of those who were no longer with us as the West Side Detroit Polish American Historical Society continued this tradition. The mausoleum of St. Hedwig Cemetery was filled with a quiet peace at 1:00 p.m. as nearly 80 pilgrims filled the chairs for the Prayer Service. It was gray outside but a bright light streamed in through the colored stained glass windows, filling the room with warmth. Organ music of Kaz Jędralczyk filled the room-familiar hymns such as Serdeczna Matko (Dearest Mother).

Society Vice President & Executive Director/Secretary Laurie A. Gomulka greeted everyone and thanked all in attendance for their presence.

Society President, Rev. Gary Michalik, led the Prayer Service. During the Wypominki, Laurie read the names of all 30 departed Society members and then each attendee read aloud the names of those departed whom he or she wished to remember.

Soul cakes were distributed to all in attendance. They are small, circular, cookie-like baked goods made from butter, sugar, flour, egg yolks, and spices. Prior to the Reformation, it was customary for poor Christians to offer prayers for the dead in return for money or food, and soul cakes were often given to these poor individuals in exchange for their prayers. During the 19th and 20th centuries, children went “souling”-similar to carol singing-requesting alms or soul cakes, and a special song was sung as they begged for the soul cakes.

Rev. Tony Fox, O.F.M. Conv., gave a presentation entitled “The Francis Effect: St. Francis Then, Pope Francis Now.” He discussed the similarities between these two great men of vision, one from the 13th century and the other from the 21st century, and demonstrated how they both have a lot to teach us about how to live.

The group then proceeded to the graves of three prominent west side individuals who are buried at St. Hedwig Cemetery. Laurie explained that each year the group of pilgrims visits the grave of at least one veteran. This year, it happened that most of the individuals whose graves the pilgrims were visiting were World War II veterans.

The Society’s founding President, Stanley J. (“Staś”) Wiśniach, is buried in the newer section of St. Hedwig. He is known as a polka band leader but, as Laurie explained, not many may realize that he was a disabled World War II veteran who had broken his back during the War due to some defective equipment. This required him to be in a body cast for over a year. He lived his life as a disabled veteran, but this didn’t stop him from performing amazing feats with his accordion and from performing professionally for 72 years.

Next to Staś Wiśniach’s grave are the graves of polka band leaders Ted Gomulka and Tom Gomulka. Laurie explained that the second-generation Polish-American band leaders shared a unique camaraderie and that they had their own funeral traditions, such as placing cigars in the pocket of a deceased fellow musician at the funeral home, making their last requests for funeral music known to one another, and the age-old tradition of playing Taps at the grave site of a fellow musician. They also had a custom of playing a polka at a colleague’s grave prior to leaving the cemetery.

At each grave visited and where memorial candles were lit, Society friend and St. Colette member Dianne Zak Marietti led the group in a recitation of a Hail Mary or a decade of the rosary.

At the St. Francis of Assisi monument, a memorial candle was lit in memory of the Franciscan fathers.

We then visited the grave of a World War II soldier who was killed in combat. Leo Surowiec was born on Detroit’s west side in 1924. He is the uncle of Society members Lawrence A. Choraszewski and Joseph F. Horaszewski. Leo Surowiec is buried in the old section of St. Hedwig Cemetery in Section F, and his grave is marked by a beautiful family monument that includes his father, Joseph, and his mother, Mary. 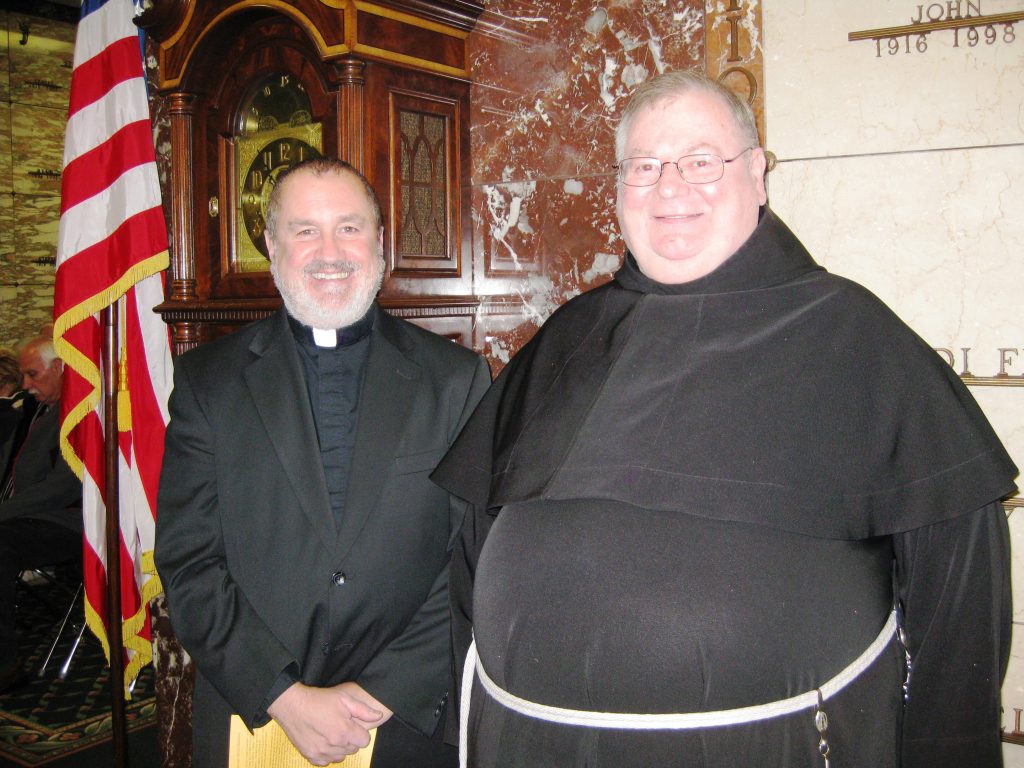 Joseph Surowiec was a land owner who owned many homes in the St. Stephen neighborhood. Joseph and Mary lived with their family in a large brick home on the corner of St. Stephen and Casper, which still stands. Many wedding receptions, parties, and dances took place in the basement of that home during the early part of the 20th century. Leo Surowiec was a graduate of Chadsey High School.

The final grave visited, also in Section F, was that of charismatic west side Detroit polka band leader Johnny Sadrack, who was born John Joseph Sadrukulski in 1919. He was beloved by the people. He was a violinist, clarinetist, saxophonist, and vocalist. He was also a composer, arranger, recording musician, and a long-time radio show host. He recorded on the national record labels Continental and Dana and he holds the record for the number of recordings made by Detroit polka band leaders. At one time, Johnny Sadrack performed seven nights a week at Club Gay Haven on Warren Avenue and Greenfield, while performing on Saturday and Sunday afternoons.

One of Johnny Sadrack’s brothers, Stanley, was killed in World War II at the age of 18 or 19 while serving in the U.S. Marines.

Johnny Sadrack was a people person and he had unmistakable magnetism. He died suddenly on February 17, 1989. Over 2,000 mourners attended his funeral, and for months afterwards, droves of fans flooded into St. Hedwig Cemetery to visit his grave.

As always, the Society remembered all of our veterans on this day. Laurie thanked Alina Klin, Ph.D., for the donation of memorial candles.

Eighteen pilgrims participated in the banquet afterwards at Cariera’s Italian not far from the cemetery. The food was fabulous and the service was equally