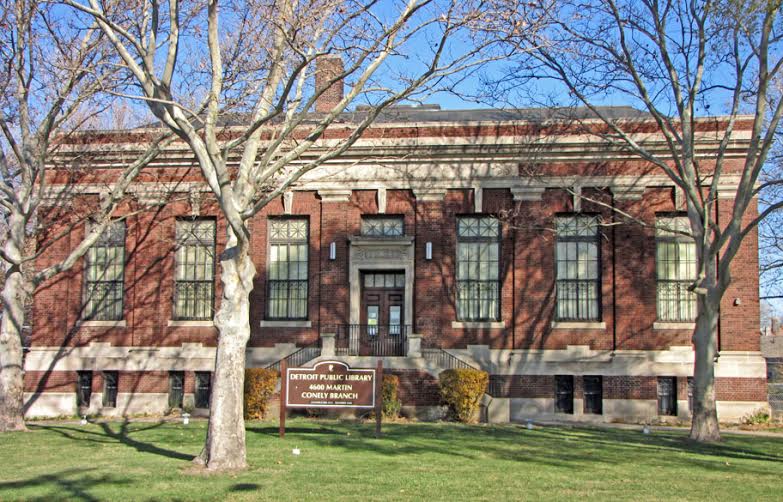 The Conely Branch Library located at 4600 Martin Street on Detroit’s Southwest side, just a short distance from Chadsey High School, is one of many legacy libraries that Andrew Carnegie bequeathed to towns all across America in the late 19th and early 20th centuries.

Named for Edwin Conely, a prominent local attorney and a member of the Library Commission, the branch library opened on September 15, 1913, in a part of Detroit that at the time was a rural area. Over the course of the next 13 years, the area grew so much that it was necessary to add a large room to the rear of the original library building, thus ensuring that the library could best serve the community for decades to come.

By March of 2000, the years of constant use had affected the building to the point that it required extensive restoration. A portion of the capital improvement funds made available by Detroit voters was used to restore this wonderful old building to its former glory and to bring it into the new century.

Today, Detroit can be proud of this Carnegie Library. Not only is it one of an ever-diminishing number of Carnegie libraries still in operation, but it is also one of the few that have been completely restored.

The flavor of the period is alive for all to see. Carnegie structures were the first to mark the beginning of the modern library system and their continuation renews the legacy of the past while affirming a commitment to the future. The Conely Branch has a collection of materials in Polish, Spanish, and Vietnamese.