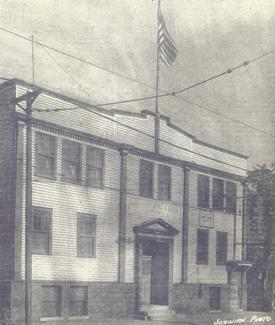 When they immigrated to the U.S., Polish Americans nationwide came together to form major fraternal organizations, and the Polish Falcons is one of about 14 of such organizations. The Falcons has its roots to a similar organization that began in Poland in 1867. The Falcons’ lodges are called nests, and the first nest in the U.S. was established in Chicago in 1887. Its motto is “A Healthy Spirit in a Healthy Body.” Its main headquarters are now in Green Tree Borough, a suburb of Pittsburgh, Pennsylvania. Along with providing physical fitness programs through educational activities, the Falcons is a fraternal benefit society that provides affordable life insurance.

The first nest in the Detroit area, Nest 31, was formed on June 13, 1892, on Chene Street between Warren and Hancock. Other nests, including Nest 79 on the west side and Nest 86 on the east side, soon followed in the Detroit area.

Nest 79 was located at 4130 Junction, north of Michigan Avenue near Buchanan. Nest 79, like other Falcons nests throughout the nation, was the key social center at which members of the Falcons met for various functions, including social, educational, cultural, physical fitness, and political functions. It was also where regular Nest meetings were held.

Some of the nests, including Nests 79 and 86, had their own orchestras. In the late 1930s, Eddie Gajec directed the Nest 79 Kapela Soko?ów Polskich w Ameryce (Polish Falcons Orchestra of America), with Ted Gomulka serving as his assistant. The orchestra was organized in January 1937 under the direction of Dr. Andrzej Musial, Eddie Gajec, and others, and consisted mostly of former high school students. When money and moral support were needed for the orchestra to continue, Nest 79’s board assigned Dr. Andrzej Musial to the orchestra’s leadership. Under his direction, the orchestra was able to purchase colorful uniforms for its members.

The orchestra’s first public appearance was in Jackson, Michigan, on July 3, 1937. They also performed on Fireman’s Field Day in Windsor, Ontario, Canada, and at the Festyn (Picnic) of All Slovenian Eagles on November 21, 1937, at the west side Dom Polski on Junction.
In 1937, Nest 79 consisted of thirty orchestra members. They rehearsed twice weekly, on Tuesdays and Fridays, at the Sokolnia on Junction Street, under the direction of Eddie Gajec and Ted Gomulka.

Nest 79 was the site of a historic and remarkable event in automotive history on the otherwise quiet Sunday afternoon of December 13, 1936. Plant workers at the Kelsey-Hayes Wheel Company in Detroit had staged a sit-down strike on December 11. Walter Reuther had arrived in Detroit in September of that year and had established Local 174 of the U.A.W., and he was attempting to organize and recruit workers for the Local. Reuther was organizing meetings in the primarily Polish neighborhood halls, including the west side Dom Polski at 3426 Junction Avenue, just a stone’s throw from the Falcons Nest 79.*

A mass employee meeting was to be held at the Dom Polski on the afternoon of Sunday, December 13, by order of Kelsey-Hayes officials, in an attempt to stifle support for the strike and to try to regain control of its employees. However, Reuther and Local 174 called their own meeting that same morning at the Falcons Nest 79. It was reported that Reuther, along with his sidekick Frankensteen and 500 unionists, marched from the Falcons Hall over to the Dom Polski and right onto the podium, overtaking the Kelsey-Hayes officials. That day, there were perhaps thousands in the now-historic Dom Polski. By the end of the day, Local 174 found itself with hundreds of new members.*