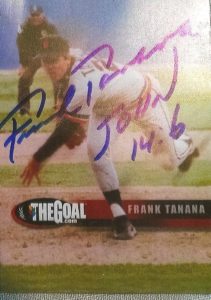 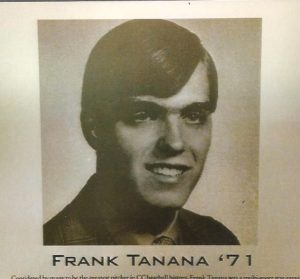 It was wonderful interviewing Frank Tanana Jr., who was born on July 3, 1953, and learning about his very early years as a young boy and being a very important part of a beautiful Polish family. His mom Delores and his dad Frank Sr. were terrific parents to Frank Jr., and they were members of St. Cunegunda Catholic Parish. They lived in a very Polish-oriented portion of Detroit on Dayton Street off Kirkwood and Lonyo Streets. Frank Jr. attended St. Cunegunda grade school. As a youngster he felt baseball was his life to be. From the age of seven, his dream was to make it to the big leagues. He played both baseball and basketball for St. Cunegunda. In addition, he played baseball for the Romanowski Post where his coach was Wally Ozog. He also played both baseball and basketball for the Boys Club on Livernois Avenue just a bit south of Michigan Avenue.

After he graduated from St. Cunegunda grade school, Frank’s education and knowledge were so good that he gained admission in September 1967 to Catholic Central High School in Detroit at 6565 West Outer Drive. He was not only a great student, but also a terrific left-handed (southpaw) baseball pitcher. He did such a marvelous job pitching for Fr. Joseph Miller, the Varsity baseball coach in 1971, that when Frank graduated from Catholic Central, he was immediately selected by the California Angels as their number one draft pick.

Two short years later, in 1973, his dream came true when he was called up to the California Angels’ Major League team, and he was quickly named American League Rookie Pitcher of the Year. In 1976, Frank led the American League in strikeouts and was selected for the All-Star team for three consecutive seasons: in 1976, 1977, and 1978. In one season he led the league in shutouts, and in another season he had the league’s lowest Earned Run Average (ERA). Frank continued to pitch for the California Angels through the end of the 1980 season.

Frank was married to his wife Cathy on January 14, 1978, and they have four daughters, whose names are Lauren, Jill and Kari (who are twins), and Erin. They also have been blessed with 13 grandchildren of whom the eldest is 11 years old. They are currently living in Farmington Hills, Michigan, and Frank has dedicated his current life to coaching young kids at all schools. He coached at Southfield Christian School working with all the athletic children within the school. It is unfortunate that his father, Frank Sr., passed away 22 years ago in 1995. His mother Delores is still alive and well and living in Redford, Michigan. She is a wonderful woman of Polish heritage and is still speaking the Polish language.

Frank Jr. noted that his love of Christ is growing ever stronger for all the wonderful gifts our Lord has given to all of us here on earth. He is serving as an evangelist to promote salvation of all souls and preaches Bible studies to assist all in their growth within the Catholic faith. He also mentioned that he is following in his grandparents’ mode to make sure he and his wife visit all of their children and grandchildren.